This Sunday in San Francisco

Jan. 16, 2023 - Join The San Francisco Conservatory of Music for their presentation of "Marc Chagall: The Color of Love", a workshop of selections from Jon's musical about the life of his artist friend.

Admission is free, but you must reserve your seats by visiting the event page at sfcm.edu.

Jon will be touring with The Band Geeks Spring 2023! The ensemble will be performing classic YES tracks including "And You and I," "Starship Trooper," "Heart of the Sunrise" and epic works like "Close To The Edge," "The Gates of Delirium," "Awaken" and others!

The first time I heard the BAND GEEKS I truly freaked out - they sound just like the classic YES of the seventies, the YES that I know and love... AND THAT'S WHAT I'M WANTING TO BRING TO YOU ON THIS TOUR... YES MUSIC IS FOREVER!!!!!!

The Band Geeks began as the house band for the Band Geek podcast, an internet show created by Richie Castellano (Blue Ãyster Cult). The band gained popularity on YouTube with their incredibly detailed recreations of music by artists like Queen, Toto, Black Sabbath and Yes, which have earned the Band Geeks over 30 million views.

You can find the link and login info on his Patreon page (NOTE - you do NOT need to be a Patreon member to see the AMA link):
https://www.patreon.com/JonAnderson

Hello to my fans and supporters!

I am thrilled to embark on this journey with you as I create the next chapter of my life's work. After years of dealing with the runaround of big record labels, I have decided to partner with you, as those of you who enjoy my work have always been my greatest support and inspiration. There are many great projects I have been working on including lots of new music, paintings, a book, and short stories. Your patronage will allow me to continue my work and will offer you priceless access.


Become a patron to: 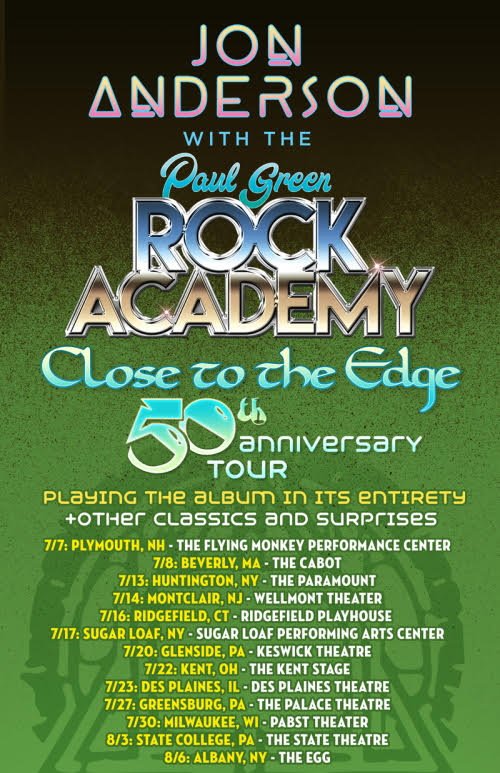 Legendary YES vocalist/songwriter Jon Anderson will be playing select shows with The Paul Green Rock Academy in Summer 2022! Jon and the ensemble will be celebrating the 50th Anniversary of the release of YES's classic album "Close to the Edge" by performing the album in its entirety, along with other classics and surprises!


This "Jon Anderson with the Paul Green Rock Academy" tour is a resumption of the tradition started in 2005 when Jon toured with Paul Green's original School of Rock All Stars.

These early shows, over 30 in total between 2006-2008, were nothing short of magical, and now Jon Anderson returns to continue that magic with a set of Yes Classics, deep cuts, mash ups, and solo works, all with lush arrangements featuring choral singing, horns, and all the other benefits of having a backing band with 25 young musicians.

Says Paul Green, "Having done a few of these songs in the past with Jon and my students, I couldn't wait to add them to the current show. Once we did 'Close to the Edge' and 'And You and I' on our Florida run in April, I was reminded of the magic of hearing these songs recreated by young musicians... They really capture the frenetic energy of the original recordings. Then when I heard it was the 50th anniversary of the album I just knew we had to do the whole thing. Jon agreed."


There are so many wonderful moments in my musical life, and being on stage with these young teenagers performing Classic Yes songs, makes me so happy and proud...
It's a marvel and a tremendous pleasure for me.

They are a joy to be with and so much fun!!!
I am grateful, thankful and feel very blessed to be able to sing along with them.
Janee and I love them all

Jon Anderson with The Paul Green Rock Academy
"So Limitless"

HERE WE GO MAKING NEW MUSIC WITH THE ROCK ACADEMY TEENS.
"SO LIMITLESS". Because we are LIMITLESS IN ALL OUR LIVING, BEING AND DREAMING...

Song by Jon Anderson and Harry Bricklin, with the students of the Paul Green Rock Academy

ZAMRAN AND THE GOLDEN MEAN

THE SECOND THE SONGS WERE PLAYED, THERE WERE FOUND TO BE PATHWAYS TAKEN BY THE ONES WHO STILL LIVE IN WONDER, ONES WHO NEED TO FEEL WHOLE, ONES WHO DO NOT REST IN THEIR HEARTWORLD AT MERE WORDS, FOR IT IS NOT WORDS THAT TROUBLE US, 'AS THEY ARE PUT THERE SOMETIMES TO ENTRANCE AND THEN LEAVE YOU EMPTY', TO REST WE SHOULD, THAT IS ONLY NATURAL, BUT TO BE READY, YES, BE READY FOR THE NEXT STEP, THE NEXT MOUNTAIN TO BE CROSSED'...