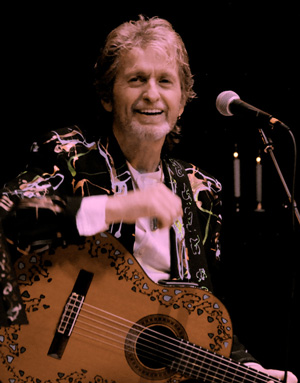 Never to stand still musically, he is getting ready to release an album he started 28 years ago through Blue Élan Records. The album’s title, 1,000 Hands is a reference to the fact that numerous guest musicians perform on the album, including Ian Anderson, Billy Cobham, Jean-Luc Ponty, Steve Morse, Chick Corea, Zap Mama, Chris Squire, Alan White, Steve Howe and many more. This album, produced by his friend Michael Franklin, really speaks to the power of a musical life still in the throes of a fervent artistic endeavor, always wanting new experiences in music, always wanting to surprise the listener. The album comes out on July 31, 2020 and will be offered on deluxe double gatefold vinyl, CD, and through all digital platforms.

If you asked Jon, he would say that he loves the adventure in making music, as evidenced in 50 years of success in the music business, working not only with many variations of Yes, but also with very successful collaborations with Vangelis and Kitaro, and more recently with Roine Stolt and Jean-Luc Ponty. His collaboration with Vangelis produced a number of hit records, including Friends of Mr Cairo which was groundbreaking in its use of narrative voiceover, creating a phenomenon that was copied by many artists and producers, most notably Michael Jackson and Quincy Jones with “Thriller”. As Jon would say, “We all copy each-others musical dreams, it’s the cross-pollenization of music that keeps the world spinning around”.

In the mid 70’s he created a pure solo album, in every sense of the word: performing all the music, playing every instrument, writing a storyline, and of course singing all the vocals in the critically acclaimed Olias of Sunhillow… a milestone in recording and adventurous creativity. You only need to look at his output of solo albums over the years to see how inventive his life in music has been, from Animation to Song of Seven, Three Ships to Toltec, City of Angels to The More You Know, to name just a few. All of these albums marked his own progression and adventure through music…leading up to 2009 following his near death, the release of the life affirming album Survival and Other Stories.

In 2015, Jon partnered with his dear friend, world renowned jazz violinist Jean-Luc Ponty, creating a wonderful fusion of jazz and progressive rock in the album Better Late than Never. In 2016, Jon joined forces with well-known prog rock guitarist and producer Roine Stolt, to create Invention of Knowledge, an album that garnered great acclaim with critics and fans alike. In 2017 Jon reformed YES with former band members Trevor Rabin and Rick Wakeman … YES Featuring ARW has toured the world to rave reviews and released the Live At The Apollo CD/DVD in September 2018.

Finally, in Jon’s words: “Music is our spiritual connection to the soul, that’s why people all over the world connect to Music and to each other through Music.”